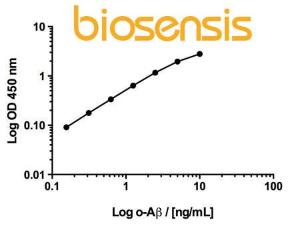 The Biosensis MOAB-2 antibody, developed by LaDu and co-workers (Youmans K. et al., 2012), has been shown to specifically detect Aβ, but not the precursor molecule APP. When utilised in ELISAs, the oligomeric form of Aβ peptide (o-Aβ) can be assayed independently of the other forms of the molecule when assayed with the MOAB-2 monoclonal antibody.

The Biosensis oligomeric Aβ ELISA kit is a sandwich ELISA that allows the preferential quantification of oligomeric Aβ peptides. This kit is exclusive to Biosensis and consists of a pre-coated mouse monoclonal anti-Aβ capture antibody (MOAB-2), a biotinylated MOAB-2 detection antibody and horseradish peroxidase (HRP)-conjugated streptavidin. The addition of a substrate (3,3’,5,5’-tetramethylbenzidine, TMB) yields a colored reaction product which is directly proportional to the concentration of o-Aβ present in samples and protein standards.

The purpose of this kit is the in vitro qualitative measurement of oligomeric Aβ peptide levels in brain extracts and CSF samples from both transgenic mice and humans relative to a known, preformed o-Aβ standard for increased reproducibility. The inclusion of a highly validated oligomeric positive control sample results in a unique, ready-to-use ELISA kit.

Advarsel: For research use only. Not for diagnostic or clinical purposes.